Another payroll week is coming

It’s yet another week of non-farm payrolls in the United States. This indicator has always been the Indicator of the Month, but now with US inflation well above the Fed’s 2% target, it is even more important than usual as a determining factor in US monetary policy.

The Fed’s recently revised statement on long-term goals and monetary policy strategy states that after inflation has remained consistently below 2%, “an appropriate monetary policy will likely aim to achieve inflation moderately above 2%. % for a certain time”. They also said that “long-term inflation expectations well anchored at 2%” are desirable. Well, now we have both: the CPI inflation rate jumped to 4.2% year-on-year in April, while the 5-year / 5-year breakeven inflation rate (the rate of inflation that the market forecasts for the period of five years from five years) is 2.4%, or just over 2%. The Fed can now rest on its inflation target – indeed, many people fear inflation may exceed its target (although most Fed officials disagree.)

It leaves the job market to decide determining whether the Fed has met its targets under its “dual mandate” of “maximum employment and stable prices.”

We recently heard more and more from various members of the Federal Open Market Committee (FOMC) charged with setting rates that they should start “thinking about” withdrawing some of their extraordinary monetary stimulus. This follows last week’s revelation of the minutes from the April Fed meeting which “A number of participants suggested that if the economy continued to move rapidly towards the Committee’s goals, it might be appropriate, at some point in the next few meetings, to start discussing a plan to adjust the pace of growth. asset purchases. ” Since then, we have heard similar comments from a few people. For example, Vice President Quarles said on Wednesday, “If my expectations for economic growth, employment and inflation over the next few months are confirmed. . . and especially if they come in stronger than I expect. . . it will become important for the [FOMC] to begin discussing our plans to adjust the pace of asset purchases in future meetings. He also said the Fed may need to explain in more detail what exactly constitutes “substantial further progress … towards our broad and inclusive definition of maximum employment.”

Note that Quarles said: “our broad and inclusive definition of maximum employment” (emphasis added). This is part of the Fed’s new awareness of how its policies affect minorities in America, a revelation that apparently became clear when it hosted a series of 14 “Fed Listens” events across the country in 2019 “to hear how monetary policy affects people” daily life and livelihoods. As a result, the Fed has focused heavily on racism in recent months. On Wednesday, for example, the Minneapolis Fed hosts the sixth of an 11-part series on “Racism and the Economy,” this time focusing on entrepreneurship. To my knowledge, racism is not a traditional concern of central banks. 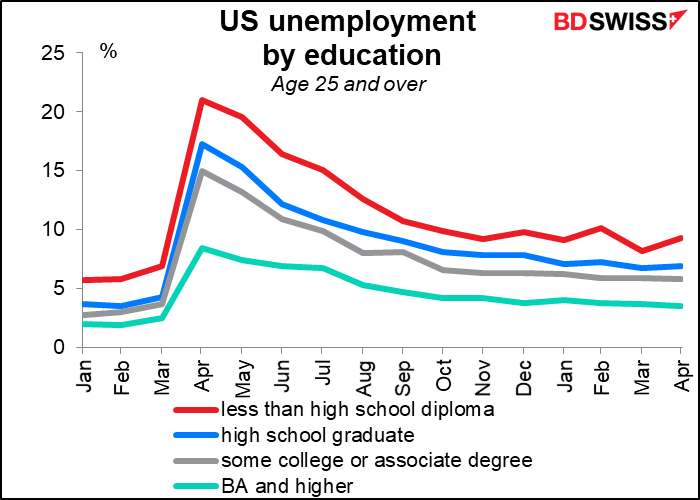 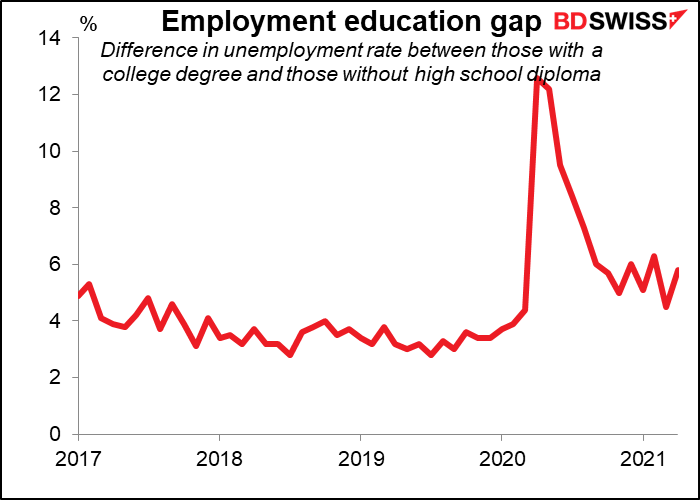 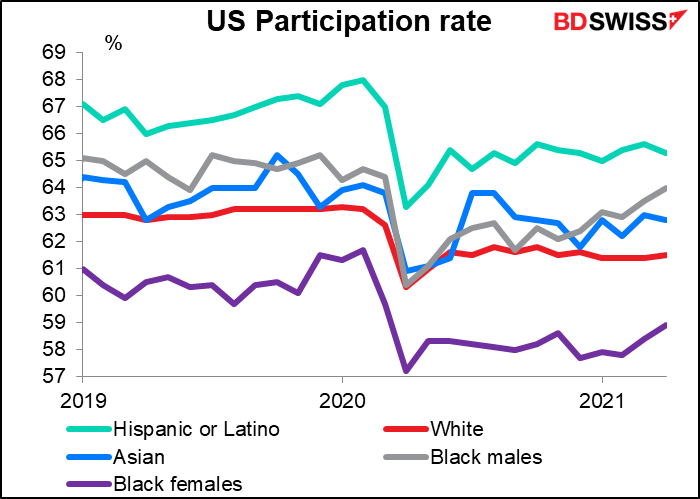 The raging debate among FOMC members about when they should start ‘thinking about’ reducing their bond purchases appears to be much more serious than the parallel debate among members of the European Central Bank’s Governing Council ( BCE). ECB President Lagarde said last week “Far too early and it is in fact pointless to discuss longer term issues”, such as reducing bond purchases. Likewise, ECB Council member Panetta noted in an interview this week that he saw no justification for the central bank to slow the pace of bond purchases in the ECB’s Pandemic Emergency Purchase Program (PEPP) at its next meeting on June 10.

Newspaper reports indicate that “some conservative central bank governors, such as Dutchman Klaas Knot, are arguing for the ECB to start reducing its emergency measures and revert to more traditional forms of stimulus”. However, I haven’t found anyone other than Knot who says that. Even Bundesbank President and uber-hawk Jens Weidmann said: “The PEPP emergency purchase program is clearly linked to the pandemic and will end when it is overcome. However, no one can reliably estimate when exactly that will be.

At the same time, the single-mandate ECB neither met its inflation target of “close to but below 2%”, nor did inflation expectations reach that level. 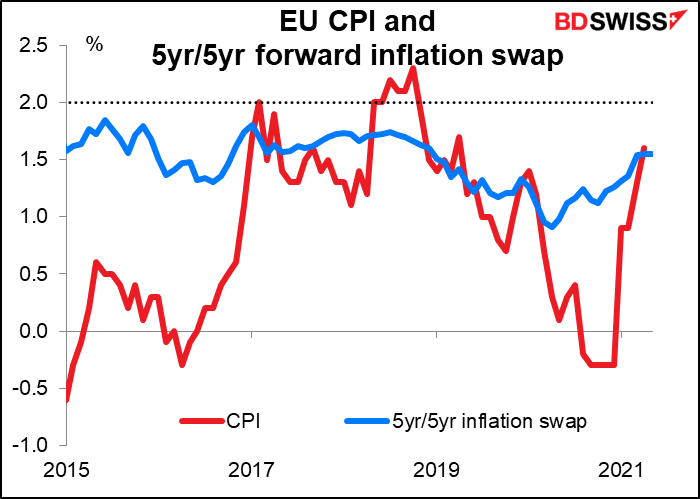 So, as the Bank of Canada cuts its bond purchases, the Reserve Bank of New Zealand plans rate hikes, and the Fed is at least “thinking about” reducing its buying, no such move. is not apparent to the ECB. The forward rates reflect this; EUR rates (blue line) are expected to be the second slowest to rise over the next 2.5 years, after the JPY (green line). A diversion in monetary policy could lead again to a fall in EUR / USD.

There’s a lot going on this week. As mentioned above, the focus will be on Friday’s US Non-Farm Payrolls (NFP). After last month’s forecast of + 1mn turned out to be extremely optimistic (the actual was + 266k), this month, economists are revising their forecasts. The median is + 675k, with forecasts ranging from + 335k to + 925k. Of course, there is plenty of time for people to revise their forecasts. 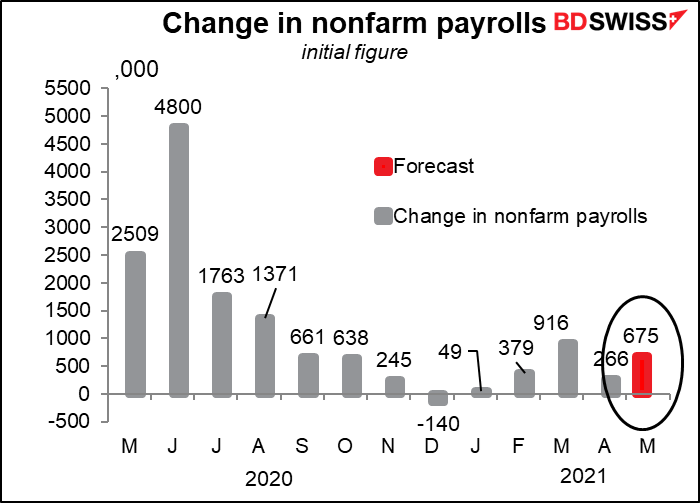 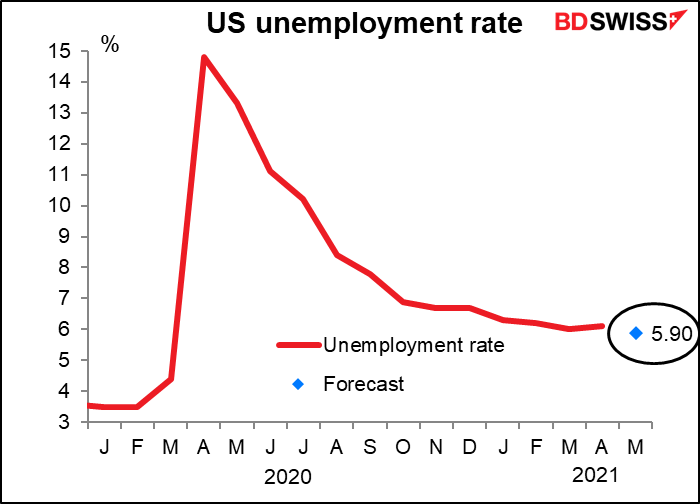 Just looking at the results, it seems that positive surprises have a more powerful impact on the subsequent movement of the dollar than negative surprises. 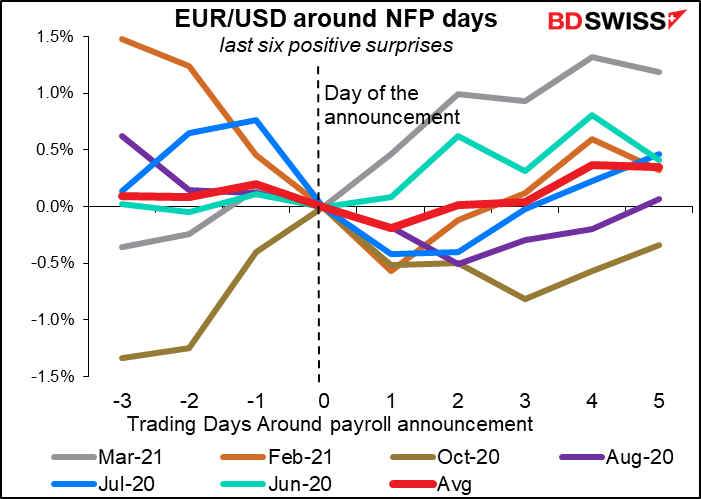 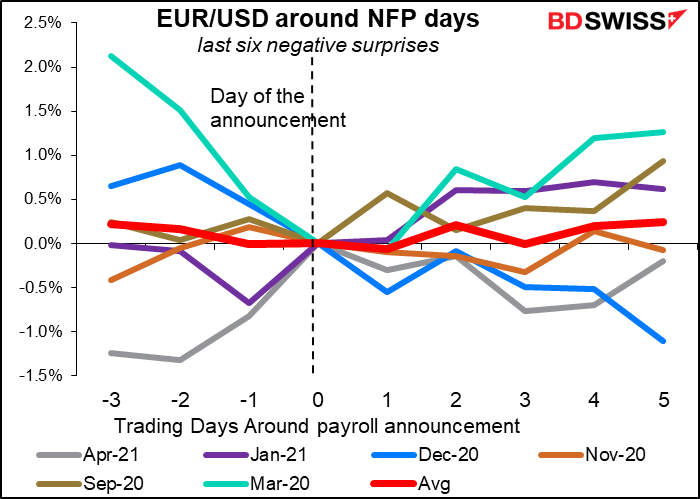 Monday is a public holiday in the United States (Memorial Day) so the ADP report, which usually comes out the Wednesday before the NFP, will be postponed until Thursday. The NFP comes out on Friday as usual though.

The only major central bank meeting this week is the RBA Tuesday. The other two central banks in commodity currencies have already started to normalize their policy: the Bank of Canada more than a month ago began to reduce its bond purchases, while the Reserve Bank of New Zealand (RBNZ) earlier this week released a forecast for its official exchange rate that incorporated a 2Q rate hike next year. Will the RBA follow? Probably not. At their May meeting, they said they would make key decisions on their yield curve control and quantitative easing programs at their July meeting. That means little to decide this week. The main focus will likely be their assessment of labor market conditions after the disappointing April Labor Force Survey (31k jobs down instead of + 20k as expected). 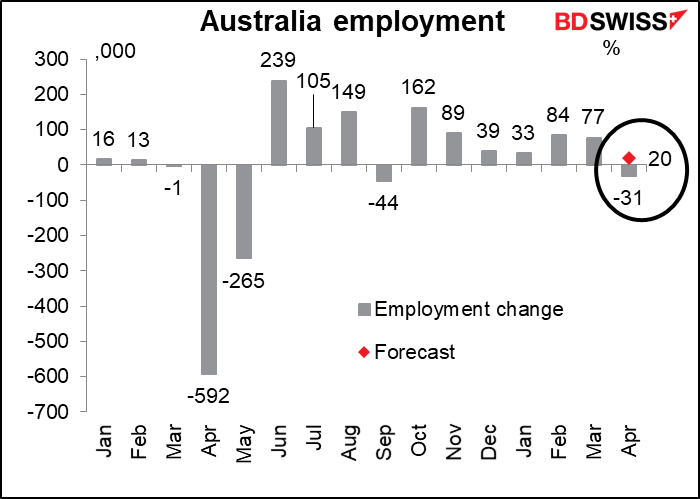 In other central bank activities, the Fed publishes the Beige Book on Wednesday, as usual two weeks before the next FOMC meeting.

G7 Finance Ministers meet in London on Friday and Saturday ahead of the G7 summit June 11-13 in Cornwall, England. This follows today’s virtual meeting of finance ministers with central bank chiefs. Finance ministers are expected to agree on uniform taxation of multinationals. This would give a boost to the formal negotiations taking place at the OECD in Paris and led by the enlarged G20 group. The negotiations have two objectives: one, to set an overall minimum tax rate for multinationals, and the other, to ensure that part of their overall profits are taxed according to the location of sales. The goal is to limit the ability of companies to shift profits to low-tax jurisdictions and instead ensure that large US digital companies pay more tax in the countries where they make sales. If finance ministers reach an agreement, G7 leaders could formally accept it at the G7 summit the following week and present the plan to the 139 countries negotiating under the “inclusive framework” at the OECD.

Discussions could be important for globally active FANG + actions, such as Facebook, Apple, Amazon and Google.

Germany announces his CPI on Monday and the EU-wide CPI is published Tuesday. Germany is expected to be above 2% year-on-year, while the EU-wide figure is expected to be close to the ECB’s target of “close to but below 2%”. However, as we saw above, it’s probably not close enough to spark any thoughts of normalization from the ECB, so it might well go virtually unnoticed unless it perhaps misses the forecast, in which case it could be a negative factor for the euro. 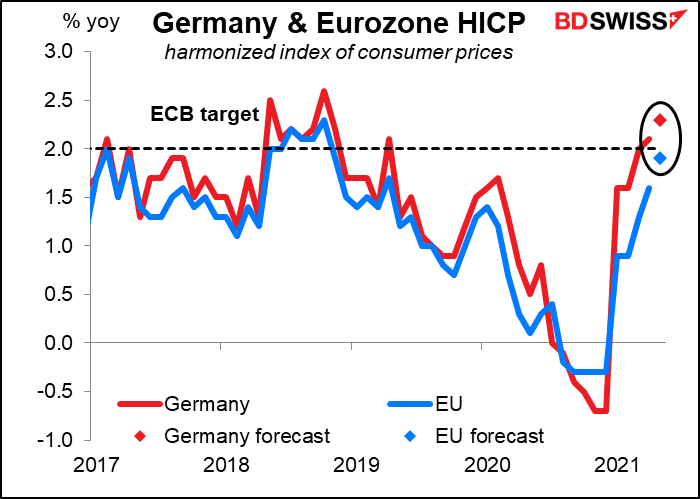 Finally, we get the final indices of purchasing managers (PMI) by Markit (production Tuesday, tertiary and composite Thursday) and with them, the eagerly awaited American Institute of Supply Management (ISM) PMI for the United States.

Last but not the least: June’s biggest event

The most exciting thing on the calendar for this month (not necessarily this week) has nothing to do with the forex market. This is the report of the American intelligence agencies to Congress on “unidentified aerial phenomena”. The unclassified report, compiled by the director of national intelligence and the defense secretary, aims to make public what the Pentagon knows about unidentified flying objects and data analyzed from such encounters.

Previous Analysis of the AUDUSD spot pair and our live trading
Next News from the EU: Greece deplores 40 years of membership – how the bloc has made the nation’s situation worse | Politics | New